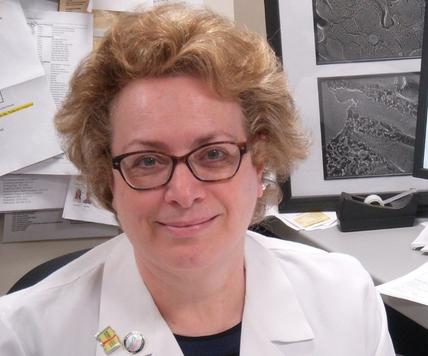 Helen Liapis is an adjunct Professor of Nephrology at the University of Munich (LMU). She is a nephropathologist working on the molecular pathogenesis of kidney disease. Her current research projects include the CUREGN consortium in the USA and ongoing collaboration with the Anders group. The Anders group focuses on acute kidney injury and tissue remodelling in chronic kidney disease and identifies and validates potential new treatment and novel targets to halt kidney disease progression. Her role in these studies is to confer validation and relevance to human disease.

Helen Liapis qualified as an MD from the University of Athens. Greece in 1974. She pursued postdoctoral training in the USA and completed a residency in Anatomic & Clinical pathology, followed by a fellowship in Pediatric Pathology & Nephropathology at St. Louis University, in Saint Louis, Missouri. She was Board certified in Anatomic &Clinical Pathology in 1990 and recertified in 2014.

In 1991 she joined the faculty of Washington University School of Medicine in Saint Louis (WUSTL), Department of Pathology & Immunology and rose through the ranks to Professor of Pathology where she was also section head of Renal Pathology & co-director of Electron Microscopy. She also held a joint appointment with the department of Medicine, Renal division (Nephrology) where she was Professor and co-director of WU Kidney Translational Research Core, O’Brian Kidney Center laboratory funded by the NIH. She retired from WUSTL in 2014 and immediately after joined the Arkana Nephropathology Laboratory in Little Rock Ankansas, as a staff nephropathologist. She resides in Munich, Germany since 2017.

She has lectured widely across the world both on science and clinical nephropathology as an invited speaker or visiting professor (>120 lectures) She was awarded the Distinguished Clinician award by Washington University in 2012, the Jacob Churg award outstanding contributions to renal Pathology in 2011, by the renal Pathology Society, and the Hellenic Spirit Foundation Distinguished Scientist Award in America, in 2006.